With the upcoming broadcast on PBS of the final episode of Les Misérables, I offer an excerpt from A Deeper Look at James by my wife, Phyllis, and me. We compare the musical with Victor Hugo’s book, but the same is true for this new six-part Masterpiece Theatre production. While I posted this six years ago when the movie version of the musical came out, this new version also leaves out a key part which explains so much. 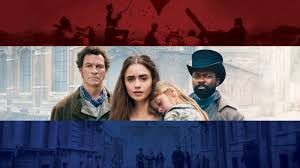 The musical based on Victor Hugo’s novel Les Misérables begins in France in the early 1800s. An ex-con, Jean Valjean, is on his way to see his probation officer after nineteen years on a chain gang. He stops at the house of a bishop, where he is welcomed warmly with a hot meal and a night’s stay; Valjean repays this kindness by stealing the bishop’s silverware. The next day he is captured by the police and returned to the bishop for confirmation of his thievery.

Yes, the bishop confirms, this man stayed with him the previous night. Then the bishop turns to Valjean and asks why he didn’t take the candlesticks too. They could have been sold for two hundred francs. He should have taken them along with the flatware. The police are shocked. What Valjean told them was true? He hadn’t stolen the silver? It had been given to him, an ex-con, by the bishop? They can hardly believe it. But the bishop insists and sends the police on their way without the thief.

Before Valjean leaves, however, the bishop tells him, “Jean Valjean, my brother, you no longer belong to evil but to good. It is your soul I am buying for you. I withdraw it from dark thoughts and from the spirit of perdition, and I give it to God!”* As a result, Valjean’s life is radically transformed, and we see him sacrificing dramatically for others through the rest of the story.

The over sixty million people worldwide who have seen and heard the musical based on Hugo’s novel are just as astonished as the police at the bishop’s amazing act of grace. In the face of being clearly wronged, the bishop does not call for punishment but literally redeems Valjean, buying him back from imprisonment and darkness and setting him free for a new life. We wonder if we could ever have done such a thing. How could the bishop have suddenly had this stroke of wisdom, courage and strength to give and forgive so generously?

The answer is that this was not a spontaneous act of mercy. It was behavior shaped and honed over years. This encounter between the bishop and Valjean is where the musical begins, but it is not where the novel begins.

In the novel we learn that years before, the bishop had opened his spacious residence to the patients from the overcrowded hospital next door, while he himself moved into the tiny hospital. He walked to make pastoral visits so he could distribute his own carriage allowance to poor mothers, widows and orphans. When a subordinate refused to visit a murderer on death row, the bishop did not rebuke the subordinate but went to the murderer and showed him how to be reconciled with God. He even convinced a gang of thieves he once encountered to make contributions to the poor.

For over fifty dense pages Hugo chronicles dozens of similar episodes in the bishop’s life before he ever meets Valjean. The dramatic act did not emerge from nowhere but was consistent with a lifelong pattern.

This is the very point James seeks to make in his New Testament letter. Character does not result from a single dramatic act of wisdom, and grace is not fully constructed overnight. Rather, they are built, brick by brick and board by board, throughout a life.