As an executive at a publishing house for decades I read dozens of business books. Some I read for my own interest. Others were assigned to me by my boss for our team to read.

Too many of these were filled with abstract ideas, gave few examples of how to put the theory into practice, had longs lists of to-do’s, were based too much on one person’s experience, or simply had too few ideas.

The best of them kept their audience firmly in mind. The authors knew their readers were busy people who needed fresh, practical ideas on specific topics. They had to keep the attention of people who were distracted by dozens of problems needing immediate attention, people who wanted help—right now. How did they do that?

1. Stories. Some business books (which shall be nameless to protect the guilty) give theory or outlines without engaging the human element. Stories engage our passions. But they also use stories to make principles concrete. Often we don’t know how to put an idea into practice in our own context until we see an example even if it is in a completely different setting. 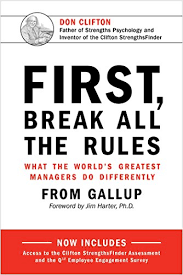 One of the most memorable pieces of leadership advice I ever read was in First, Break All the Rules. Counterintuitively the authors said not to spend a lot of time trying to fix weaknesses in employees. Rather concentrate on their strengths and on your best employees. That seemed odd to me until they told a concrete story of Jean P. whose average for data entry was 50% higher than the national average. Her manager helped her set goals to improve and track her progress. In three months she doubled her performance. So she set new goals and in six months she doubled that! (p. 177)

Suddenly the point became clear. Rather than spending a lot of time trying to get five average people on the team to improve by 10%, far more could be achieved by giving focused attention to star performers (in data entry or sales or case loads). When I read that, I got it! And it transformed how I managed.

2. Practical. The best books don’t open with several chapters of theory and then offer concrete advice at the end. Rather they mix theory and practice in every chapter. Unless readers feel they will get something they can use right away, they will give up on the book.

3. Substance. I am often annoyed by business books which “are magazine articles with a very high view of themselves.”* Books that stretch out a single, thin idea are exasperating. They waste my time. While most readers won’t tolerate a thick, academic approach, they do want something that is based on solid research which has been distilled in a way that doesn’t talk down to them. Which brings us to the next point. 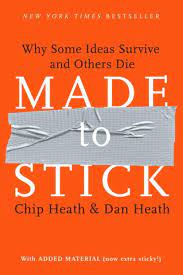 One of the best business books I’ve read is, under the surface, a manual on how to write a business book. Made to Stick by Chip and Dan Heath is for those who have an important message to convey—teachers, sales managers, team leaders, coaches, writers, parents, entrepreneurs talking to investors, yes, . . . and those writing business books.

They highlight six points which they summarize in a memorable acronym SUCCES—Simplicity, Unexpectedness, Concreteness, Clarity, Emotion, Stories. And they practice what they preach, using all six of these features in their book to explain each of the six points.

No one formula is right for every book. But if you are able to incorporate even some of the elements the Heath brothers encourage, regardless of the kind of book you are writing, then you’ll definitely be in business.

*As my friend Steve Board once put it. 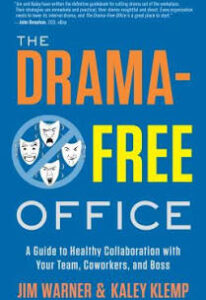 When employees are unhappy with a decision that leaders have made, often they don’t react against the decision. Instead they complain long and loud about the process.

“All sides were not heard adequately.”
“There wasn’t enough time.”
“We didn’t know how the decision would be made.”
“Key discussions were behind closed doors.”
“The right people weren’t involved.”
“Clearly some ulterior motive was at work here.”

END_OF_DOCUMENT_TOKEN_TO_BE_REPLACED

Years ago Steve Stuckey, a colleague in InterVarsity, told me a story about Campus by the Sea on Catalina Island, off the coast of Southern California. Rattlesnakes have been on the island for time out of mind. In the mid-1930s, some enterprising folk brought in wild pigs to keep the snake population under control. The plan worked great. Fewer snakes.

But then the wild pigs started to roam all over, invading campgrounds and other areas. So some enterprising folk used a dog, Cinder, to keep the pigs at bay. The plan worked great. Fewer pigs.
END_OF_DOCUMENT_TOKEN_TO_BE_REPLACED

I’ve said that so many times I’ve almost convinced myself that I originated the aphorism. But probably it came from my predecessor, Jim Sire. (Unless he stole it from someone else.)
END_OF_DOCUMENT_TOKEN_TO_BE_REPLACED

My wife, Phyllis, was assigned the task of giving a talk on professionalism. She asked me, “What would you say?”

Professionalism can have negative connotations–being artificial or phony. I suppose for some that’s what it is. But that’s not how I think of it.
END_OF_DOCUMENT_TOKEN_TO_BE_REPLACED

This week we hold our annual off-site, all-day meeting for everyone in the company. It’s something we’ve been doing for almost twenty-five years. We close down the reception desk and warehouse, shut off the phones, put emails on automatic reply, and bring in employees who work in other parts of the country.

What do we do?
END_OF_DOCUMENT_TOKEN_TO_BE_REPLACED

When I read a business book, I’m often looking for the hot, sexy idea that puts a new spin on things, the innovative perspective that helps me see things in a new way, the dead-on research that makes a compelling case all by itself. Creating Magic: 10 Common Sense Leadership Strategies from a Life at Disney by Lee Cockerell is none of these things.

END_OF_DOCUMENT_TOKEN_TO_BE_REPLACED

Senator Joe Biden famously monopolized the time allotted to him in the 2006 confirmation hearings for Samuel Alito to the Supreme Court. In the fifty minutes allotted to Biden, he spoke about 5,600 words to Alito’s 2,000.

Biden was not alone. Of the fifteen senators questioning Alito at the hearing, only two (both Democrats) let Alito talk more than they did. When there is a desire to get as much information about Supreme Court nominees as possible, what the majority of senators did is certainly a counterintuitive approach. No doubt Alito was happy to let the minutes tick by without having to say anything that could potentially get him into trouble.

There are lots of wrong ways to interview a prospective employee and a few right ways. One wrong way is to talk too much. The goal of an interview is to get candidates to talk and talk and talk.

So here’s point number one: The point of a job interview is to get a window into what kind of person this is you are thinking about hiring. Within limits (some of them legal), I think it’s fine to get candidates talking about almost anything. Resist the temptation to talk about the company, the nature of the job, your own pet peeves or anything else. Your job is to get the candidate to talk.

On to point number two: Focus the discussion. Obviously, at some point in the conversation you want to zero in on the job. Since not all questions are created equal, how can we stay on task?

Assuming customer interaction would be an important part of the job, “How would you handle a customer complaint?” is pretty good. But a better approach is, “Tell me about a time you received a customer complaint and how you handled it.” With the first question, candidates can imagine ideal scenarios. But the second request is more revealing. What did they actually do? What strategies did they use? What attitudes did they show?

What people say they actually did in the past is a better predictor of the future than what they imagine they will do in the future.

If you want to hire the best person to fill a position in your department, let the candidates do the talking. If you want to talk, maybe you could go into politics.