Matt Ruff’s fun supernatural novel, Lovecraft Country, is an homage to H. P. Lovecraft and his spooky, weird pulp fiction of the last century. Yet it is also an incisive critique of Lovecraft’s bigotry. 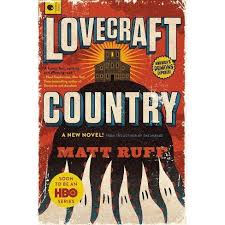 Set in Chicago in 1954, the novel follows a series of exploits of an extended family and their friends as they encounter mid-century racism while traveling, while trying to buy a house, and while trying to get jobs. These characters are very aware of the power dynamics at work around them, but they nonetheless act with resolve and creativity to achieve their ends. In ways these are classic underdogs—unlikely and under-resourced people who somehow manage to succeed.

The encounters with the police, with realtors, with employers are vivid and real even as the paranormal and extraterrestrial weave in and out of the narratives. At the beginning of the second episode, for example, we get one of the best, briefest explanations of redlining in Chicago in the 1950s to be found. And then there is the fun—the tributes to Lovecraft’s genre, to Dr. Jekyll and Mr. Hyde, to fifties-era space comics, and more.

Ruff is a master of comic irony, of flipping the script, of teaching us our own history without our even knowing he has done so.

My wife has a heart as wide as the horizon. I have the emotional range of a turnip. While my wife disputes this, many others have confirmed it. I think I know at least part of the reason. While my name may be French, my blood seems to be Scandahoovian.
END_OF_DOCUMENT_TOKEN_TO_BE_REPLACED

The problem with publishing? Clearly, not enough statistics.

Baseball has wins and losses, RBIs, home runs, strikeouts, saves and ERAs. But those are so twentieth century!

When I was on vacation, playing cards with friends, someone said, “Hey, have you seen these? Try one.” It was Hershey’s new Kisses Air Delight.

What this means is that you are now paying the same amount of money for less chocolate. In place of the missing chocolate, Hershey’s has added an ingredient that is entirely free to them—air.

I don’t know what you think of this, but I think it is brilliant.

It’s time for publishers to do the same–make money on something that costs publishers nothing or on something they do anyway but don’t currently charge for. If they did, the problems of the industry would disappear. Here are a few ideas I’m working on:
END_OF_DOCUMENT_TOKEN_TO_BE_REPLACED

We don’t usually get to choose our names. They come to us at birth unbidden. Some people change their names later on, of course, like Chad Ochocinco or Prince have done–in their case for apparently promotional purposes.
END_OF_DOCUMENT_TOKEN_TO_BE_REPLACED

Last week I posted what I read in 2009. Here’s the best, the most, the worst and the biggest of what I read this past year:
END_OF_DOCUMENT_TOKEN_TO_BE_REPLACED

Of all the shticks on NBC’s The Office, one of my favorites is the rivalry between Dwight and Jim. The pranks Jim plays on Dwight are priceless–and perhaps a bit too reminiscent of actual jokes played by some of my colleagues on other colleagues (never by me, of course).

Linda Doll and I included one of my favorite stories in our anecdotal history of InterVarsity Press, Heart. Soul. Mind. Strength. It highlights the friendly rivalry between the staff of Campus Life magazine (some thirty-plus years ago when it was run by Youth for Christ) and the staff of InterVarsity’s HIS magazine.
END_OF_DOCUMENT_TOKEN_TO_BE_REPLACED

Mark Twain is without a doubt one of the most colorful characters of the American literary scene. Here is an episode (found in John Tebbel’s Between Covers) recounted by Twain’s publisher, Frank Nelson Doubleday, in his The Memoirs of a Publisher. I reproduce it here for your enjoyment without comment, as no comment is required.
END_OF_DOCUMENT_TOKEN_TO_BE_REPLACED

Fame is a difficult burden to bear. I know.

Several times I’ve been asked to be interviewed for videos InterVarsity Press has done to highlight new books. Most recently, I have a starring role for the piece on John Stott’s fiftieth anniversary edition of Basic Christianity.

It had over 250 views on youtube.com in its first month, until I told my extended family about it and it rocketed up to over 260. So you can see the kind of load I am under.

By comparison JibJab’s “Time for Some Campaignin'” has over 1,250,000 views in two months. Now you know why the paparazzi are after me the way they are.

After we showed the Stott video at an all-office meeting, exactly zero people came up to me and told me what a great job I did. And zero told me I had room for improvement. How am I to cope with such an overwhelming response?

I also make a cameo appearance in the video Heart. Soul. Mind. Strength. That one isn’t even on youtube. A good thing too! Who knows what invasions of privacy I might suffer if it were!

Fame, however, is fleeting. I am prepared to deal with that too.

Just over a year ago I posted my first blog on Andy Unedited, stating that “to write a blog, you need to have an interesting personality or provocative opinions. I have neither.” I’m still not sure I have either, but in this, my one hundredth posting, I do know I’m having fun.

Here are some highlights from the first 100:

Mistiest Watercolored Memory: Vice President of Looking Out of the Window. It brought back lots of found recollections about my dad.

Most Controversial: The Serial Comma and the Plagues of Egypt. Who would have thought the lowly comma could arouse such passions?

Most Whimsical: Dear Santa. Old St. Nick brings out the wish list in us all.

Title with the Cleverest Rhyme: Do You Itch for a Niche or Are You on the Leash of Your Niche? Actually, it was the only title with a rhyme.

Truest Confession: Trashing a Book. Guilt still hangs over me for this.

Most Opinionated: Grammar Was Made for People, Not People for Grammar. I guess I do have some opinions after all.

Biggest Grammatical Error: Publishing that Lasts. I’m afraid that first sentence was not a case of breaking the rules on purpose, as my loving wife gleefully pointed out.

Post That Made My Staff the Most Nervous: “I Love to Fire People.” There was really no need to worry. I haven’t fired anyone . . . yet!