One of the besetting sins of churchgoers throughout the ages has been to take verses out of context. We show disrespect for and do damage to the Bible when we act like it is a grab bag of timeless truths we can rummage through at will. We mislead others and ourselves about what the authors actually meant.

The paragraphs surrounding a particular verse are key, of course. But so is the way authors structure their work—how episodes are laid side by side or paired in different sections. Structure conveys meaning which we are wise to pay attention to that lies beyond the surface of the text. 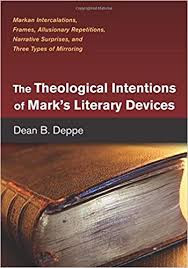 In Dean Deppe’s tour de force, The Theological Intentions of Mark’s Literary Devices, he systematically unpacks the dense networks of meaning embedded in Mark’s gospel. Though not organized as a commentary, the book covers virtually the entire gospel.

Mark is famous for his “sandwiches” (also called intercalations or chiasms) in which he divides a narrative in two, inserting another in the middle. The story of Jairus’s daughter, for example, is interrupted by the woman who has been sick for twelve years.

In this academic work, Deppe also considers other devices such as framing (matched episodes that bookend a section), allusionary repetitions (recurrences of Old Testament references), mirroring (reflecting the experiences of the community Mark wrote for), and narrative surprises (such as a response of fear or lack of understanding to a miracle rather than amazement or faith).

Under his detailed analysis, four themes emerge: the Messiah is a suffering, crucified servant; discipleship will also be met with suffering, confusion, and failure; the Gentiles are welcomed into the new community in Christ; many Jewish regulations are fulfilled in Jesus and are no longer in effect.

In these last two themes, Deppe sees Mark closely aligned to the theology of Paul who pioneered mission to the Gentiles. Luke and Matthew, by contrast, regularly soften Mark’s diminishment of OT regulations (e.g., eliminating “The Sabbath is made for man, not man for the Sabbath,” “In saying this, Jesus declared all foods clean,” and others). In this vein Mark likewise suggests that Jesus’ temple action is more than a symbolic cleansing but a symbolic destruction.

Deppe comes to these conclusions partially through his use of biblical criticism. While this results in seeming to set Jesus against Mark at times, his approach also unearths interesting insights regarding Mark’s use of geography. His work on the absence of Jesus (when Jesus is separated from the disciples) is also worthwhile.

I have long favored Deppe’s general approach of paying attention to Mark’s sophisticated use of literary devices. In Mark Through Old Testament Eyes, I especially consider two interpretive keys. The first is, as the title suggests, Mark’s intertextuality and the second is the way he structures his gospel.

I welcome Deppe’s comprehensive work both for the overall emphasis he gives to these and other devices for understanding Mark as well as for the thirty, sixty, hundredfold yield of insights into the gospel that he harvests in this important book.

I have attended worship services in a variety of traditions throughout my life, but they tended to have one thing in common–they began with praise to God and then moved to confession. This is a good and appropriate model to follow that has a lot of merit. When we see how holy and good God is, we see more clearly by contrast that we are not.
END_OF_DOCUMENT_TOKEN_TO_BE_REPLACED

On the cross, Jesus quotes from the first verse of Psalm 22, a psalm of lament. Psalm 22 begins with a strongly stated complaint that God is far away (vv. 1-2), which is followed by the statement of confidence in God (vv. 3-5). The psalmist (identified in the title of the psalm as David) then enumerates the specifics of his lament (vv. 6-18), followed by his petition for deliverance (vv. 19-21). He concludes with a vow to proclaim God’s goodness to the people (vv. 22-26), which will be known to the ends of the earth in generations to come (vv. 27-31).
END_OF_DOCUMENT_TOKEN_TO_BE_REPLACED

While Peter was below in the courtyard, one of the servant girls of the high priest came by. When she saw Peter warming himself, she looked closely at him.
“You also were with that Nazarene, Jesus,” she said. But he denied it. “I don’t know or understand what you’re talking about,” he said, and went out into the entryway.
When the servant girl saw him there, she said again to those standing around, “This fellow is one of them.” Again he denied it.
After a little while, those standing near said to Peter, “Surely you are one of them, for you are a Galilean.”
He began to call down curses, and he swore to them, “I don’t know this man you’re talking about.”
Immediately the rooster crowed the second time. Then Peter remembered the word Jesus had spoken to him: “Before the rooster crows twice you will disown me three times.” And he broke down and wept.

In Shusaku Endo’s novel Silence the Jesuit priest Father Sebastian Rodrigues is sent to Japan in 1638. His assignment is to investigate reports that Father Ferreira, who had previously been sent by the Jesuits as a missionary to Japan, had under torture denied his faith.
END_OF_DOCUMENT_TOKEN_TO_BE_REPLACED

32 They went to a place called Gethsemane. . . . 35 Going a little farther, he fell to the ground and prayed that if possible the hour might pass from him. 36 “Abba, Father,” he said, “everything is possible for you. Take this cup from me. Yet not what I will, but what you will.” 37 Then he returned to his disciples and found them sleeping. “Simon,” he said to Peter, “are you asleep? Couldn’t you keep watch for one hour? 38 Watch and pray so that you will not fall into temptation. The spirit is willing, but the flesh is weak.”

In Jesus’s prayer in Gethsemane, we hear him address God as “Abba, Father” (Mark 14:36), pray that God’s will would be done (14:36), and tell the disciples to pray so they “will not fall into temptation” (14:38). Where else in Scripture have we heard a prayer that takes up similar themes?
END_OF_DOCUMENT_TOKEN_TO_BE_REPLACED

On reaching Jerusalem, Jesus entered the temple courts and began driving out those who were buying and selling there. He overturned the tables of the money changers and the benches of those selling doves, and would not allow anyone to carry merchandise through the temple courts. And as he taught them, he said, “Is it not written: ‘My house will be called a house of prayer for all nations’? But you have made it ‘a den of robbers.'” Mark 11:15-17

In AD 165, a terrible plague hit the Roman Empire that lasted for fifteen years. Some historians think it was smallpox, but whatever the cause it was devastating. Perhaps a quarter or more of the population died. A hundred years later another plague hit Rome, with similar results. Bodies were piled up in the streets, some being thrown there before people actually died. Thousands abandoned the cities for the countryside in an attempt to escape the pestilence.
END_OF_DOCUMENT_TOKEN_TO_BE_REPLACED

Isn’t Mark a bit of a Scrooge for not including the story of Jesus’ birth in his gospel? Really! No star in the east. No angels touching their harps of gold. No little town of Bethlehem. What a grump! And what’s up with beginning with John the Baptist preaching repentance? Does that sound like Christmas? I submit that it does not!
END_OF_DOCUMENT_TOKEN_TO_BE_REPLACED

The gospel of Luke has a wonderful birth story of Jesus. Every year we even get to hear it read by Linus in A Charlie Brown Christmas special. Matthew adds in the Wise Men but starts even further back, beginning his gospel with Abraham. Not to be outdone, John’s gospel goes back even behind Genesis, before creation, to when the Word was with God.*
END_OF_DOCUMENT_TOKEN_TO_BE_REPLACED

What can you find in Mark Through Old Testament Eyes? Glad you asked. Here’s what some have had to say.
END_OF_DOCUMENT_TOKEN_TO_BE_REPLACED

For years now I have taught the gospel of Mark to InterVarsity college students. Often they would raise questions about confusing or troubling passages:
END_OF_DOCUMENT_TOKEN_TO_BE_REPLACED