This week I am scheduled to receive my Covid-19 vaccine. To mark the occasion I am republishing here my blog from June 23, 2016.

My sister died because of a vaccine . . . a vaccine she never received. On a September morning in 1952, at the age of seven, Lucy Rae Le Peau contracted polio and died that afternoon. The vaccine that would have saved her life would not be developed for another year. 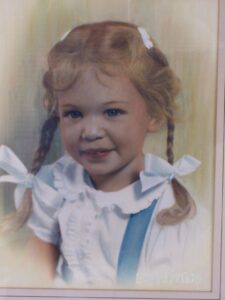 It was a vaccine my grieving mother prayed for desperately, especially because her three other children, including me, were still vulnerable to the terrifying disease. Every year thousands of children across the United States were struck with it, peaking the year my sister died with over 57,000 cases, of whom 3,145 died.

Jeffrey Kluger’s Splendid Solution tells the captivating story of how a determined Jonas Salk, despite his junior status in the field and controversial approach, skillfully pushed through his inactive or killed virus vaccine. His rivalry with the intimidating Albert Sabin, who opposed Salk at nearly every turn, provides even more drama to a tale that has plenty of its own.

Another important subplot interwoven with the main narrative is how Franklin Roosevelt, himself a polio survivor, established the Georgia Warm Springs Foundation in 1927 with his friend Basil O’Connor. In 1938 this fundraising juggernaut was transformed into the National Foundation for Infantile Paralysis (NFIP) still under O’Connor’s direction. Later it became the well-known March of Dimes. The foundation was instrumental in funding Salk’s team and others. O’Connor also facilitated collaboration in a somewhat competitive and secretive field, bringing leading scientists together to share results and provide overall guidance.

As a side note, the wife of IVP author Kenneth Bailey, Ethel (née Milligan), was a microbiologist working under Salk in Pittsburgh. She and the rest of the research team were among the first to receive the vaccine before it was tested on others to assure its safety. Then followed carefully monitored tests on several hundred children in the area.

With those positive results in hand, in 1954 the NFIP set up perhaps the most extensive field tests in medical history involving almost two million school-aged children. On April 12, 1955, exactly ten years after Roosevelt died, the announcement was made public. It worked. The press conference, one of the most extensively covered media events of the decade, was held at the University of Michigan which was tasked with analyzing the field results. President Eisenhower announced the formula would be given away free to countries around the world.

Within ten years less than a hundred cases were reported in the United States. By 2015 there were less than a hundred worldwide. Salk didn’t think of himself as a hero, but this vaccine pioneer was a hero nonetheless, saving tens of thousands of lives and preventing disability for over ten times that many.