Mixing singular and plural is generally a no-no.

Suppose I write, “The senator were having trouble getting re-elected after he started wearing his toupee upsidedown.” Even if you are not a grammar hound or a hairstylist, you are probably cringing. If the subject is singular, the verb must be too. If the subject is plural, so must be the verb. And no fair changing midsentence!

Yet in one situation, this is changing. It has become more acceptable to write sentences in the form: “. . . a person . . . they . . .” or “ . . . everyone . . . their . . .” This is an effort to get around “he” or “he and she” language which can be awkward or problematic. Switching from singular to plural nouns can solve many difficulties. For example:

Apparently, somebody at the golf course thought their putter would float.

This is so much better than:

Apparently, somebody at the golf course thought his or her putter would float. 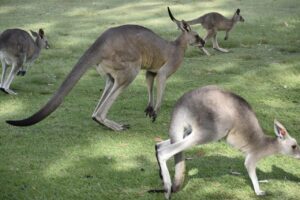 Unfortunately, the “singular they” has become so common that it is often used when it is just not necessary. Consider:

Everyone must decide for themselves if kangaroos should be allowed to run for office.

Obviously, we don’t want everyone to decide for himself or herself! That’s as awkward as an elephant on stilts. But there is an alternative. Changing the singular/plural mix to pure plural is the way to go:

People must decide for themselves if kangaroos should be allowed to run for office.

By making everything plural we have the best of both possible worlds: it’s graceful and includes everyone, even kangaroos.