Many think something is very wrong with the U.S. political system. In Robert Tracy McKenzie’s excellent book We the Fallen People, he contends that one problem lies with how we have wandered from the way the Framers of the Constitution understood human nature. As we saw in my last post, the Framers were realists who knew people weren’t reliably good.

A key turning point in this drift came almost two hundred years ago, just a generation after the Constitution was written. In the presidential election of 1824, one of the most contentious in U.S. history, Andrew Jackson pioneered three strategies which have been a staple of American politics ever since. 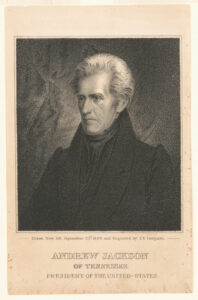 First, he “ran against Washington DC,” proclaiming himself the outsider who could fix a broken system. Second, he developed a populist strategy which many have followed (both liberals and conservatives) ever since.

McKenzie helpfully describes this, saying, “Populists see the world . . . as a struggle between ‘the people’—always clothed in robes of righteousness—and some insidious threat to the people, typically a corrupt elite who would subvert the people’s welfare for selfish gain. . . . When populist leaders pay tribute to ‘the people,’ who they really have in mind are the folks who agree with them. Everyone else is an enemy” (p. 161).

The result of the election? Andrew Jackson led the field with 99 electoral votes. But he failed to carry a majority with the rest spread among three others—John Quincy Adams with 84, William C. Crawford with 41, and Henry Clay with 37. With no majority in the electoral college, the Constitution required the decision go to the House which elected John Quincy Adams.

The Framers of the Constitution, you see, wanted the election of the president to be shielded from the passions of the crowd—thus they inserted the Electoral College and the House. As I noted here, the Framers feared not only the tyranny of a king but also the tyranny of a majority (even a majority of white men like themselves).

As a result Jackson and his supporters pioneered a third strategy—they proclaimed long and loud that the presidential election of 1824 had been stolen from “the people” even though absolutely nothing underhanded or illegal had been done. The Constitution had been followed exactly as written. Yet he kept asserting this for the next four years despite its obvious lack of truth. Jackson also falsely claimed that the Framers thought the person with the most popular votes should be President even though the Constitution clearly says otherwise. Jackson won in 1828.

“The Framers of the Constitution would have been horrified” at Jackson’s populist strategy and its success. “In Federalist nos. 10 and 51,” McKenzie writes, “James Madison had argued that the only way to protect minority groups in a republic was to hope that society would be so diverse and the number of distinct interest groups so large that majority coalitions would rarely emerge.” He stated that whenever “a majority be united by a common interest, the rights of the minority will be insecure” (pp. 169-70).

What’s wrong with U.S. politics? The Framers had an answer: “We are.”

That’s why they created a system that sought to protect all of us from ourselves. We forget this at our peril.

Despite the divisions during Jackson’s time, all sides listened to one major voice. He was an unlikely option not only because he was young and an aristocrat, but also because he was a foreigner. In addition, he agreed with Madison and dissented from the populist majority. His name was Alexis de Tocqueville, and his book (which I will discuss in part three of this series) was the timeless classic Democracy in America.