At the beginning of Wired to Create, Scott Kaufman and Carolyn Gregoire dismiss the four-steps of creativity that Graham Wallas proposed a hundred years ago. Such a notion is just too simplistic, they say. I was interested in this because I make use of Wallas’s ideas in Write Better. And the authors have a point. Creativity is messy and doesn’t always follow a straight line, which Wallas’s scheme can imply. 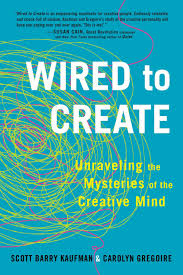 I found it interesting, however, that at various points in their book Kaufman and Gregoire comment positively on each of the stages Wallas identifies, though they don’t reference him.

Regarding the messiness of creativity, Wallas says something very similar. When we come across a problem, we have to investigate it from all directions. Our research and reflection must be wide ranging. We never know ahead of time what data, experience, or experiment may prove useful. This is similar to the dozens of sketches over a period of weeks that Picasso prepared before he painted his masterpiece Guernica, a story told in Wired to Create. Wallas calls this first stage preparation.

The authors also consider the quintessential “aha” moment of inspiration—the most common notion people have about creativity. That is Wallas’s third stage (illumination). Such epiphanies, they note, are often preceded by a period when we are relaxed, daydreaming, or distracted, such as when we are on a walk or in the shower. The authors give French mathematician Poincaré as an example–just as Wallas does in describing his second stage (incubation).

Creativity is not just a moment, however. The authors say it can take weeks, months or years to work out an idea. Creativity requires perseverance and follow through to see if the idea can become reality. That’s Wallas’s fourth stage (verification).

Kaufman and Gregoire and certainly correct that there is much more to creativity than Wallas’s four dimensions. They highlight the important roles of play, solitude, mindfulness, and sensitivity, among others. Creativity is a complex, multidimensional process that cannot be completely encapsulated in four linear steps. But the four steps are still part of the process.