For decades I have loved, reread, recommended, and extolled William Zinsser’s On Writing Well. He is wise, practical, enjoyable to read, and absolutely on target for new and experienced writers.

While I have been dispensing writing advice for decades (to authors, in lectures, in writing), when I thought about doing a book on writing myself, I was met with two thoughts—neither encouraging. First, how could I possibly say anything better than Zinsser when he says so much so well? Second, what would I possibly put in a book that Zinsser doesn’t already cover? Was anything left to say? 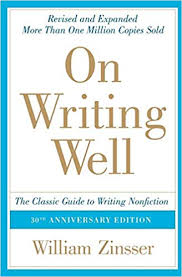 Most other books on writing fell into one of two categories. Either they were memoirs of famous writers with a few writing tips sprinkled here and there, or they were detailed guides to punctuation, grammar, word usage and so forth. While both sorts of books can be helpful, what I appreciated about Zinsser was his middle path of providing principles. His advice was concrete enough to put into practice but general enough to be broadly applicable. That’s the kind of book I also wanted to write—if I could.

I began by making a list of possible topics. Soon I saw they fell roughly into the three categories of craft, art, and spirituality. Half of Zinsser deals with craft but he says almost nothing about the other two. What he writes in that first part about simplicity, clutter, words, and usage is unsurpassed. So I focused on topics he doesn’t cover such as structure, persuasion, narrative in nonfiction, titles, and more. While he also addresses openings, endings, and audience, I took a different but complementary approach.

The last two-thirds of what would become Write Better would clearly be distinct. My five chapters on art consider the nature and practice of creativity, the value of breaking the rules of writing, the significance of tone, the glories of metaphor, and how saying less leaves room for art.

Zinsser had a Protestant upbringing and actually edited a book called Spiritual Quests. But he wrote little on the topic. In his final edition of On Writing Well, he considers the attitudes authors have toward their work—regarding voice, enjoyment, fear, and so forth. I consider some of these topics and many others in my final part on spirituality and writing, but within an explicitly Christian framework.

Something else I could offer that many writing books don’t include is a window into the mysterious world of publishing. Several appendices pull back the veil a bit on this realm of intense interest to writers.

I still recommend Zinsser. My aim is for Write Better to join him in the underpopulated category of principle-based books on writing.