The center of Christianity is the cross. But how are we to understand the crucifixion? How is it that in the death of Christ we find salvation, forgiveness, new creation, justice, victory over the powers, and hope for the future? And why in particular was such a gruesome, publicly humiliating execution required? 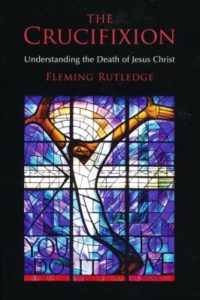 This Lent, to assist me with such questions, I have been reading Fleming Rutledge’s The Crucifixion, a book providing what she sees as the first substantive book on the cross for pastors since John Stott’s The Cross of Christ. Overall in her view Christ’s crucifixion is God’s victory over Sin, Death, and the Devil. The Powers are vanquished as the Apostle Paul so often gives testimony. But Christ’s substitutionary work—in our place and on our behalf—is the necessary partner to this cosmic rectification, a theme that arises out of the biblical narrative rather than a theological scheme.

She offers a robust defense of substitution throughout. In particular she thoroughly rehabilitates the eleventh-century archbishop Anslem when today it is popular to denigrate the person credited with bringing substitution to the fore of church teaching. She also finds much to admire in Calvin, though not necessarily in his successors. Rutledge believes both have been misunderstood because scholars fail to see that these two are not working primarily in the realm of academia. Their purpose is pastoral—as is hers.

Rutledge’s sword cuts both ways. She finds much to praise and criticize in both mainline and evangelical circles. For example, she has no patience for evangelicals who see penal substitutionary atonement as the only true way to understand the cross. The Bible offers a wide range of images, metaphors, and teachings on Christ’s death, and we do it much injustice by diminishing or ignoring these. Nonetheless, she also has words of praise for figures like Billy Graham and F. F. Bruce.

At the same time she upends superficial aphorisms such as “God accepts us just as you are” or “Forgive and forget” or declarations of radical inclusiveness. None of us can achieve this no matter how open we are. Our congregation may accept those with Downs but may give up on someone with narcissistic personality disorder. We may welcome a transgender person but find we cannot include an unwashed, unmedicated street person. Then there are times conservative evangelicals are disdained or discriminated against. All fall short, you see.

Another major theme throughout the book is the equivalence of justification and righteousness which derive from the same Greek word. Further, we should not see this as a static condition, says Rutledge, but as God’s activity of setting things right. God rectifies the wrong, the sin, the evil in us and in the cosmos. Rectify better emphasizes what is going on than justification or righteousness which have become encumbered with centuries of debate and misunderstanding.

She is right that the manner of Christ’s death is significant. Dying in his sleep or having the dignity of being beheaded like a Roman citizen would have meant entirely different things. I found her case unconvincing, however, that the crucifixion was the most horrific and humiliating death of all since she would have to survey every other possible form of death to prove her point, clearly an unachievable task.

This and a few others are quibbles however in a stellar work that deserves (as it is getting) a wide readership among pastors, scholars, and those in the pew. She fully achieves the goal of searching the depths of this core of our faith, leading us to praise, worship, and renewed hearts.