Often I read words or phrases that make my grammatical hair stand on end, my syntactical stomach churn, and my semantical head bow in grief. Someone uses “impact” as if it were a verb or “ask” as if it were a noun, and I become anxious, disoriented, and grumpy with my dog. Do I need medication? Can you help me?

Editors and writers worth their salt have pet peeves. Being a salty person myself, I have many.

I sympathize with your problem. Why do people insist on forcing the word ask to do what it was never meant to do? They don’t even say, “Please,” to such a request. All along we have had a perfectly good noun to use in such situations. Oh, and there it was—request! So, no, I will not make a big ask here. I will make a polite, though perhaps large, request.

No doubt the ship has sailed when it comes to impact. Making it a verb is sadly now just part of standard usage. But I die a little every time I hear or read someone say, “How did that impact you?” or, “We were impacted by the recession.” Couldn’t they say, “The recession had a negative impact on us”? Or what’s wrong with affected or influenced when a verb is needed? 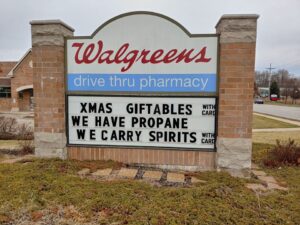 And what is the difference between giftables and gifts? Two extraneous syllables and four unnecessary letters! What could possibly justify creating a gratuitous adjective just to make it into a noun? And don’t get me started on using too many exclamation points!

If, however, I hear one more customer service rep tell me on the phone that they are going to “reach out” to a colleagues instead of “contact” them, I swear I will reach right through the ether and request that someone give that rep the gift of laryngitis. That would have a most salutary impact.

Then there is this. Since when did the undeveloped syntax of the playground retort, “You’re not the boss of me,” become standard adult usage? I have no problem if someone wants to tell me, “You’re not my boss.” That’s something I can engage with respectfully. But the former creates a massive facial tic that interrupts my ability to think rationally.

I’m sure my readers have other similar pet peeves, and I’d be glad to hear them. But what then is the solution for sensitive souls like you, Unsettled, and me?

We must remember that part of the genius of English is its flexibility. New forms and new words pop up all the time—some bad but many good. Time will sort out which is which. Certainly we should oppose confusion, ambiguity, and error. But we can’t eliminate all change if we also want to have the benefits of a versatile language.

Therefore, it is best to remember that for those of us who love language, it is our lot in life to suffer.