In 1996 Charles Scribner III wrote the introduction to a history of the publishing house whose name he shares.* Here are some quotations that show that the more things change in publishing, the more they stay the same.

On the Importance of Finding New Writers
In 1913 Charles Scribner’s only son, another Charles (III), graduated from Princeton and began his career in publishing. He was a contemporary of Perkins and Wheelock, and his age gave him a ready grasp of the importance of the new writers who were beginning to appear on the scene. (p. xviii) 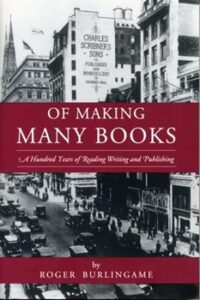 On the Importance of a Balanced List
I think it’s fair to say that by the 1950s the star-studded Perkins years had left an unfortunate legacy. The editors were on the perpetual lookout for the new Hemingway or Wolfe to arrive—like Godot. Their attention was fixed on the fiction front, to the exclusion of other areas of publishing. To restore some balance to the list–and a balanced list is essential to a publisher’s survival—Scribner set out to develop fields of nonfiction history, biography, how to books…. But Charles Scribner, Jr.’s own true love was for reference works, and these years saw the birth of works that have become the staple of every major school, college, and public library. (pp. xxiii-xxiv)

On Finding the New in the Old
In the context of my thumbnail history of Scribners very little of recent times is truly new; we were doing much the same a century ago. In effect, the postwar decades may be viewed as a recapitulation of earlier themes; that is to say, striking a balanced list, recognizing the importance of non-fiction, maintaining a backlist, bringing out series of books such as reference sets, and co-publishing with British firms. (p. xxiv-xxv)

For those in publishing looking for good ideas for the future, sometimes the best ones can be found in the past.

*The book is Of Making Many Books by Roger Burlingame, which (originally published in 1946) covers the first hundred years of Scribner’s. The book was reprinted fifty years later by the Pennsylvania State University Press.