Maybe you’ve noticed that a lot of Christmas music is in a minor key. Even many of our favorites.

Every key has its own distinct color and mood. But since Christmas is a joyful time of year, we would think it calls for a solid, all-is-right-with-the-world major key, which it often does. Then why do so many carols make use of the sometimes mournful or uncertain tones of a minor key? Even something as cheery as “Carol of the Bells” is minor!

We can understand it for “O Come, O Come Immanuel” which focuses on the centuries that the people of Israel waited for a Messiah to come and rescue them from the oppression of other nations. A minor key can also convey a sense of mystery, which the story of God becoming human certainly contains. 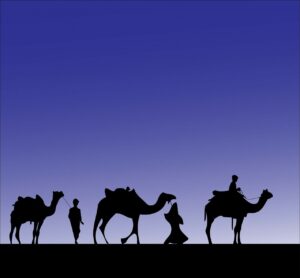 But why does “We Three Kings” mix the minor-like Aeolian key with a chorus that is major? Is it to give the carol a Middle Eastern flavor in light of the magi coming from the east? Perhaps.

The text of this carol by John Henry Hopkins Jr. may also give us a clue. The five tightly constructed standard five verses include an introductory and closing verse. The three verses in the middle are each devoted to one of the three gifts, each in the voice of a different wise man.

“Gold I bring to crown him again,” declares this first. This verse is appropriately upbeat, noting how gold is associated with kingship and, in this case, a king whose reign will last forever.

The second gift, frankincense, is burned in worship, giving a pungent odor that reminds us both of God’s presence and of our prayers rising to God. As the second wise man says:

It’s when we get to myrrh that the minor key truly comes in to play. This spice was commonly used when burying the dead, including Jesus’ burial (John 19:39). Thus:

Here we find the reason a minor key is sometimes employed. Christmas carols often point out that the Incarnation is a necessary prelude to the cross. “I Wonder As I Wander,” for example, explicitly opens with the question of why the Savior was born only to die.

The last verse of “We Three Kings” doesn’t stop at the cross, however. It completes the story by looking forward to the resurrection even as it summarizes the previous three:

We rightly celebrate the joy of Christmas and the promise brought by the Prince of Peace. Yet it is a story that is deeply human as well as deeply divine, mixing both sorrow and joy. The mixture makes the joy much more than a superficial happiness, but something that is deep and lasting.