We have a hard time seeing ourselves objectively. We are just too close, and too likely to accentuate our virtues and minimize our weaknesses. It’s true of groups (sometimes called ethnocentrism) as well as individuals. How can we then get an accurate view? An outside assessment can help. 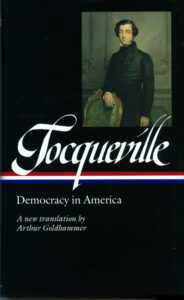 Alexis de Tocqueville’s classic Democracy in America gave Americans just that. Writing after his extended visit and intense investigation into Jacksonian America in the 1830s, Tocqueville admired Americans for their freedom and hard work but was cautious of their overly congratulatory view of themselves. In this caution, Tocqueville’s thinking lined up with the Framers of the Constitution (see here).

People are and always will be a combination of “good instincts” and “wicked inclinations.” We are not getting better and better every day in every way. Human nature with its flaws and strengths has remained constant for thousands of years. (Are we more advanced, more civilized now than five thousand years ago? With 160 million or more killed for political reasons in the twentieth century, it is hard to argue it is so.)

Individuals embody this mix of traits as much as groups. Power, therefore, always carries dangers, regardless of whether a group or an individual wields it.

As Robert Tracy McKenzie summaries this in his outstanding, wide-ranging book We the Fallen People, “Power is always a threat to liberty and justice. This probably seems obvious under a monarchy or dictatorship, but Tocqueville is warning us that it holds no less true for a democracy” (p. 204).

Examples abound in American history including the forceable removal of thousands of Cherokees from Georgia under Jackson’s administration. Tocqueville didn’t think we should do away with democracy because of such problems. Democracy has many blessings. But we do ourselves a disservice when we fail to openly acknowledge that tyranny of the majority has happened here and that it can happen again. Therefore, we must always be on our guard—even from those we agree with who can also exercise that tyranny.

Tocqueville’s own family history made him sharply aware of this dynamic. Five of his relatives were guillotined (along with thousands of others) by the passions of a democratic majority in the French Revolution forty years before, and his parents were traumatized by the events for the rest of their lives.

Tocqueville viewed democracy in America with clear-eyed realism. He knew that both “Indians and Negroes suffer the effects of tyranny.” So while he did not have unalloyed faith in democracy, he nonetheless did have hope for it (despite his family’s history).

He saw its benefits at least among the white population, a diverse group by European standards. This country of immigrants was “a society compounded of all the nations of the world. People each having a language, a belief, different opinions: in a word, a society lacking roots, memories, prejudices, habits, common ideas, a national character” (p. 220). Yet in his view they were freer and more prosperous than any such population in Europe.

What made democracy in America work despite its drawbacks? That is the topic of the next post in this series.