What has made democracy in America work despite its drawbacks?

One weakness Alexis de Tocqueville noted in his classic Democracy in America sounds all too familiar today. In the 1830s he saw that the most noble and qualified people were seldom elected. Instead those who won office often bowed to the lower impulses of the electorate rather than courageously doing what was right in the face of public opinion. 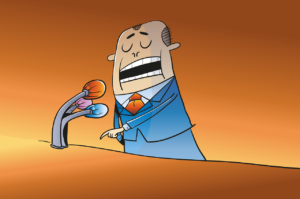 Another problem he spotted is also eerily familiar. Elected officials regularly offered simplistic answers which cannot hold in the face of complex problems. “An idea that is clear and precise even though false,” Tocqueville observed, “will always have greater power in the world than an idea that is true and complex” (p. 194). That is so whether the ideas come from the right or the left.

Why then, he wondered, did democracy still work in America? One reason he gave is geography. The country was so vast and open while the government was so small that it could not easily involve itself with the citizenry. In addition there is so much cultivatable land that the average citizen could prosper, adding stability to the country and the government.

A second reason was the Constitution with its brilliant collection of checks and balances (discussed in a previous post here).

Third were the country’s mores. Mores is a squishy term, but Robert Tracy McKenzie in his own exceptional book, We the Fallen People helpfully summarizes it and Tocqueville as a whole. Mores are “the common beliefs and values that shaped the ways that whites in Jacksonian America interacted with each other and their government” (p. 228).

Tocqueville labeled one such key belief as “self-interest, properly understood” united with Christian ideals. “The first trained them to believe that their short-term desires could betray their long-term self-interest. The second [Christian ideals] warned them that what they had the power to do was not always morally proper to do.

“What unified these seemingly disparate dispositions is that they both inculcated what Tocqueville calls ‘habits of restraint.’ In essence, both their religious beliefs and their commitment to ‘self-interest, properly understood’ conditioned Americans to question the wisdom of their natural impulses. To the degree that they did so, they discouraged a supremely self-confident and all-powerful majority from becoming agents of tyranny” (p. 229).

Americans lived by “enlightened” self-interest. It’s a big question whether we still do so now. Not only do children today rarely exhibit the virtue of delayed gratification; adults have trouble as well. Credit card debt is just one case in point. Concern for our economic well-being now can overwhelm long-term considerations for the Social Security system, the national debt, the environment, the country’s infrastructure, immigration, and more.

The appeal of both long-term self-interest and religion have diminished in recent decades. In the next post in this series we will consider how religion might have a more beneficial role in society.