Why would God need the cross to forgive us? Isn’t he powerful and merciful enough that he could just have declared us forgiven and reconciled? Why would Jesus have to die?

This is a point Muslims sometimes make. In fact, they say the parable of the prodigal son in Luke 15 backs their claim. The father (clearly a stand-in for God) did not die. We have no cross, no incarnation, no Son of God, no savior, no resurrection. In fact, the father doesn’t even pronounce forgiveness. The father simply wills their reconciliation and demonstrates that by restoring the son’s standing through clothing him in the best robe (which would be the father’s best robe) and putting the family signet ring on his finger.

No, they say, Jesus is clearly a good Muslim who affirms Muslim teaching. Christians, they say, have perverted his message. 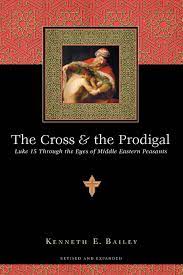 This challenge was key in driving Kenneth Bailey deeply into this famous story. The result was his book, The Cross and the Prodigal. As he notes there, he found, to the contrary, that the cross, that sacrifice is profoundly embedded in this parable.

Long the father suffers. Devastated by the abrupt and painful rupture with his son, daily he waits, looking in the distance, hoping to see his son return, his son whom he misses dearly.

When he does spot him, the father sacrifices his dignity by running to meet his son. Nothing is more sacred to a Middle Eastern patriarch than his honor. Such men of his age and stature do not run in excitement like school boys. They float. They move with slow decorum, befitting their place in the community.

In addition, for such a man to run would require him to gather up his robes so he could move quickly and easily. This would shame him even more by exposing his legs in public. This may seem a minor point to those of us who do not live in honor-shame cultures. But for the father it was a very costly act.

The children of the town, “amazed at seeing this respected village elder shaming himself publicly,” would no doubt race after the man to see what the to-do was all about. Others would follow, including his servants who are present to receive instructions from the father regarding his son. In this way, openly for all to see, the father covers the son’s shame and humiliation, and takes it all on himself (p. 67). 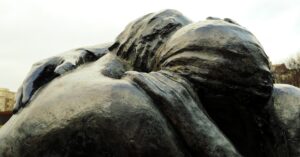 Further, he acts as his own intermediary. Mediators are common in such cultures. Two people who are at odds do not confront each other directly lest one loose face. The father took this risk of rejection. Indeed, having been the grievously injured party, custom would require that the father wait and aloofly receive his groveling son—which is exactly what the son expects. The father again sets aside his honor for the prospect of joyful reconciliation.

I already mentioned the robe and the ring, costly gifts in themselves. The father also sponsors a lavish feast for the whole community. The son, you see, has not only alienated himself from the whole family but from everyone who knew of his despicable behavior—and in a small, tightly-woven village, everyone would know. They would all have felt shamed by the son. If the patriarch of their community is dishonored, they are all dishonored. The father must publicly demonstrate the son’s restored standing (restored honor) so others will do the same out of respect for the father.

During Lent, as through the whole year, we marvel at the God who surrendered his honor and his wealth to make forgiveness and reconciliation possible for we who wandered off.