We the Fallen People 6

Original sin is not a popular notion. You sure won’t find Oprah supporting it. The idea that we are born with a tendency to do wrong, to be selfish, to ignore the common good is just downright unAmerican.

As McKenzie notes in We the Fallen People, “A New York Times poll found that 73 percent of Americans believed that humans are born good. A 2014 Lifeway survey found that two-thirds (67 percent) of respondents believe that ‘most people are by nature good’” [250-51].

Today we live in what Tom Wolfe called the “Me Generation” and what David Brooks labeled in The Road to Character as the age of “the Big Me.” Yet, contrary to popular opinion, our sinful nature is, as Chesterton once observed, the only Christian doctrine that is empirically verifiable.*

Admitting our flaws and weaknesses is the first step to improvement. That goes for us as individuals and as a country. As I’ve noted over several blog posts (beginning here), McKenzie makes the case that the Founders of America had a very different view of human makeup than we do today. They believed so strongly in our flawed natures that they structured the Constitution on this foundational idea to protect us from ourselves. McKenzie writes:

There’s nothing unpatriotic about acknowledging moral failures in our country’s past. G. K. Chesterton emphasized this truth over a century ago in his classic work Orthodoxy. In its essence, patriotism is less an expression of pride than a commitment to love a particular human community, and authentic love “is not blind,” Chesterton observed. “That is the last thing that it is. Love is bound; and the more it is bound, the less it is blind.” Never for a minute accept the false dichotomy that pits patriotism against an honest acknowledgment of America’s failures and flaws. Because love binds rather than blinds, we are free to criticize our country without somehow betraying it. [259] 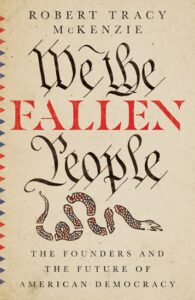 Living out a conviction of original sin will require that we confess the allure of power, acknowledge the danger of power, and work proactively to mitigate the abuse of power. If we accept the reality of original sin, we’ll know that the seductiveness of power is fueled by our self-interested nature. . . .

Heeding their [the Founders’] warning is complicated by two obstacles. First, in our heart of hearts we doubt that it really applies to us. Too much power may be dangerous in the hands of Nazis or Democrats or our teenage children, but we’re confident that we can be trusted. Second, we are blinded by our preoccupation with the present, unaware of how much the fall has left us short-sighted as well as selfish. [272]

It will require agreeing with the Framers that power is dangerous whoever wields it, not just when it is controlled by our political rivals. [279]

Criticizing the nation or the government is not disloyalty. Those from the right and the left do it all the time. True patriotism is love of country, celebrating what is good, and wanting what is best for all, but not blind loyalty. It is also admitting flaws in our past and in our present. Only then can we move from the good toward the better.

Image by Clarence Alford from Pixabay

2 thoughts on “Being a True Patriot”