I was with a group of friends recently who have known each other for years . . . ok, decades. Well, let’s just admit it all up front. We are a bunch of old codgers.

We have lived a lot of life together, seen our children grow and marry and have their own children. We’ve seen heartache and laughter. And we’ve stayed well connected.

Our age and stage of life came into sharp focus when Cooper, the twenty-something grandson of someone in our group, joined us for a get together. He had a sharp and active mind with an engaging personality. He listened a lot and then eventually began asking some incisive questions.

We were talking about the problem of fake news. Several voiced outrage at the challenges of discerning what was accurate and what wasn’t as well as at the ethics of those who intentionally put out twisted information. 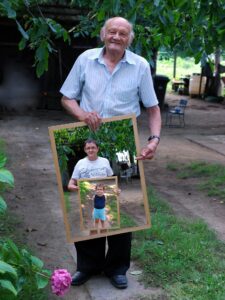 Then Cooper said, “Can I ask a question? Do you feel you are entitled to the truth?”

Without hesitation everyone chimed in, “Yes.” “Of course.” “Certainly.”

“That’s interesting,” he responded. “Because I don’t think my generation believes that we are. This world of uncertainty is just the hand we have been dealt. Not being sure of what is true and of what isn’t is simply the way things are.”

The irony of Cooper using entitled did not escape me. We were now being gently labeled with a word that we had probably all used to malign people of his age.

I was also struck by the chasm between our generation and Cooper’s. Yes, it made me feel very old. But I appreciated the clarity that Cooper gave to our differences and the added challenges our children and their children have in the world.

My first reaction, nonetheless, when Cooper finished, was to blurt out, “Thank you, Cooper, for pointing out that we are all conservative here.”

Though we were a group of people with mixed political and religious ideas, at this one central point we were all united. We thought that Truth existed, that it was possible to find it, and that we deserved to know what it was. This is a very traditional, very conservative idea. It goes back millennia and permeates a wide variety of ancient cultures. And we all believed it, whether liberal or not.

I was encouraged that we held this important belief in common. Searching together for the truth was not a hopeless endeavor. It was worth us all pursuing.

Image by Hajnalka Mahler from Pixabay