Teachers and nonfiction writers are sometimes hesitant to tell stories. Just giving the content straight seems so much better. People can get the wrong point from a story, after all. Stories can be subjective, vague, striking different people different ways. We don’t want people confused. And some may like a particular story and others not.

Giving content straight, however, has its disadvantages. Straight content can be limited and give the illusion that we know all we need about a topic in an aphorism or an essay.

If we say God is all-knowing and all-powerful, that is well and good. Maybe we add more. We say God is love, and as a result we also should love. This too is true. We definitely need to know that and believe it. It makes a massive difference in how we understand the Christian life. We have touched the mind in important ways.

And what if we tell a story? What if we tell of a man with two grown sons? The younger son shows immense disrespect for his father, asking for his share of the inheritance. Essentially he is saying he’d rather his father be dead so he can get his hands on the money.

How does the father react? Does he get angry? Does he laugh in his son’s face and mock him? No. He grants the son’s request. Promptly the young man leaves the family and squanders the wealth that he’s been given. 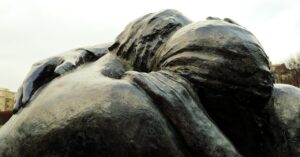 After some time, and having wasted everything, he is destitute and starving. In desperation he decides to return to his father, thinking to make an abject apology and ask for mercy.

All this time the father has been waiting, looking over the horizon, hoping to see his son return. And then, amazingly, he recognizes a disheveled figure, trudging down the road toward the house. The father sets aside his dignity and runs to meet him. Before the son can finish stumbling through his confession, the father calls for the servants to organize a great party for the whole community. Why? To celebrate the return of his beloved son who once seemed dead but is now back, alive.

And we? We have been touched in our hearts. We are moved. We are changed that this is the kind of God we have, a God who loves us even in this way.

One response to “Why Tell Stories”