Robert Caro’s book on Robert Moses and four books on Lyndon Johnson are legendary for their length (a total of almost 5,000 pages) and the length between volumes (about a decade). In Working, a collection of interviews and articles, we learn something of the method in his madness.

His passion is not just to inform readers but to help them see the force of these men and feel their impact. To do so he goes to tremendous, time-consuming lengths to track down and interview incredibly hard to find people and page through tens of thousands of pages of documents.

Caro was, for example, intent on finding out how Johnson’s ambition showed itself even in college. Everyone told him, however, that one key fellow student, Vernon Whiteside, was dead. Then one person said Vernon was alive and planning to live in a mobile home north of Miami in a town with “Beach” in the name. Caro and his wife tracked down every mobile home court in those towns (using phone books!) and finally found him–but didn’t call. He flew there to talk in person.

Multiply that by hundreds and we get some idea of why his books are so long and took so long. 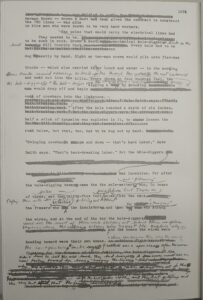 Caro’s other passion is explaining how political power works because it has a tremendous effect on our lives. Robert Moses was determined to reshape New York City with bridges, highways, parks, and other public works. To do so, during his forty years in power, Moses displaced a half million of New York’s fourteen million people—forcing them out of their homes, destroying communities. In a democracy, Caro wants us to know how that kind of power (of an unelected official) works.

His powerful interviewing techniques range from the common (use silence to get people to fill in the quiet) to the persistent (asking over and over, “What did you see?”) to the obsessive (moving to the Hill Country of Texas for three years) to knowing the importance of place (taking Johnson’s brother to the Johnson Boyhood Home after visiting hours to trigger hidden memories of difficult dinner conversations between his brother and their father).

The book is disjointed and a bit repetitive because of its nature as a collection. But the dozens of fascinating anecdotes and tidbits give us a window into the work a writer with keen instincts and tenacity.

image: flyleaf of Working by Robert Caro (edited manuscript page by the author)