The tragedy is that smart people continually think they are exceptions to the rules. Ironically, people who don’t think they are too smart are better off because they believe they can benefit from the experience of others. 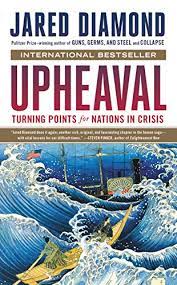 In Jared Diamond’s recent book, Upheaval, the author focuses on what we can learn from countries in crisis. He tells the fascinating stories of six countries over the last two hundred years who each faced a major turning point—some navigating those moments with great success and others with less. What makes Diamond’s book particularly insightful is that he has visited each of the countries dozens of times and speaks the language fluently in all but one.

What factors contributed to handling crises well? Among a dozen he names are facing reality squarely, accepting responsibility rather than blaming others, letting go of doctrinaire commitments, being willing to modify some elements of national identity while retaining others. In light of these, Diamond then considers the prospects for the unresolved crises today in Japan, in the United States, and in the world as a whole.

I found the chapter on Chile to be notably unnerving. Chile had a long democratic tradition, identifies with Europe rather than Latin America, and enjoys protection from invasion by significant geographic features. Yet when the left, right, and center parties in Chile all refused to compromise, the country descended into cruelty, violence, and oppression for twenty years, from which it has still yet to fully recovered.

Chile’s lessons of inflexible, extreme partisanship loom especially large for the present-day United States. Every government leader and concerned citizen should absorb the warnings and wisdom of this book if we wish to navigate our future together successfully.