In December 2000 a story appeared in several British newspapers, including The Guardian, about a man in New York, George Turklebaum, who had been dead at his office desk for five days . . . and no one noticed! Coworkers at “the publishing-services company” often passed by his cubicle and said hi without it registering that he hadn’t responded. “We just assumed that George was taking time to go over the text very carefully, as he always did,” said his boss. 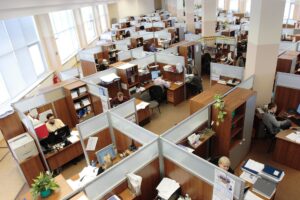 Anything sound odd to you about that story? Anything odd besides a man being dead in an office for five days without anyone noticing?

Anything odd like, “Why did British papers report about a man being dead in New York instead of New York papers?”

Or odd like, “Why was the publishing-services company not named?”

Or odd like, “Wouldn’t a body start stinking to high heaven long before five days?” (Spoiler alert: it would.)

You’ve probably heard this story or variations of it which have circulated for at least the last twenty years. The truth is, it was first published by an American tabloid, the Weekly World News, which also publishes such important stories as “Newest U.S. Judge is 5-Years Old,” and “The Yeti Is Behind Cryptocurrency,” and former Vice President “Mike Pence Is a Cyborg.”* You get the idea.

The only source of this report for all the British newspapers, even for one as highly reputable as The Guardian, was the tabloid. There was no other corroborating evidence.

When David Mikkelson did some research at Snopes, he found that no one named George Turklebaum was listed in the Social Security Death Index, and the New York Medical Examiner’s office had no information on the death of anyone named Turklebaum for 1999 or 2000.**

Yet so many of us hear stories like this one about the dead office worker, and we think, “Weird. But I can actually see that. Don’t we all feel like nameless cogs in a machine sometime?”

We take it in, often uncritically. Yet right on the surface are aspects that should make us question what’s going on. Not just a rotten corpse, but the lack of specifics (like the company’s name) and of sources (like a police report).

The key word is uncritically. We don’t stop to question. Thinking critically about what we read or hear doesn’t mean being critical in the sense of finding fault. It means asking questions.

To some extent it doesn’t matter what questions we ask. Almost any question will do. The point is to ask a question and not stay on autopilot.

The question can come at the beginning, the middle, or the end. It can be profound or prosaic. Regardless, doing so engages us. We become actors in the drama, dialogue partners in the conversation, friends in the relationship. We are not merely passive receptacles into which entertainment, advertisements, opinions, information, or disinformation are poured.

Many people (including those we agree with) want to sway us for their own purposes. Nurturing the habit of asking questions about what we hear or read can, among other benefits, provide us with a vaccine against the virus of being manipulated by others.

—
*These are actual headlines from https://weeklyworldnews.com/, accessed January 28, 2021.

Image by David Mark from Pixabay