Robert Caro’s book on Robert Moses and four books on Lyndon Johnson are legendary for their length (a total of almost 5,000 pages) and the length between volumes (about a decade). In Working, a collection of interviews and articles, we learn something of the method in his madness. 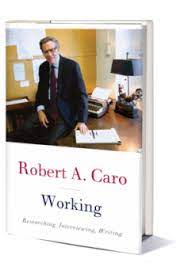 His passion is not just to inform readers but to help them see the force of these men and feel their impact. To do so he goes to tremendous, time-consuming lengths to track down and interview incredibly hard to find people and page through tens of thousands of pages of documents.

Caro was, for example, intent on finding out how Johnson’s ambition showed itself even in college. Everyone told him, however, that one key fellow student, Vernon Whiteside, was dead. Then one person said Vernon was alive and planning to live in a mobile home north of Miami in a town with “Beach” in the name. Caro and his wife tracked down every mobile home court in those towns (using phone books!) and finally found him–but didn’t call. He flew there to talk in person.

Multiply that by hundreds and we get some idea of why his books are so long and took so long.

Caro’s other passion is explaining how political power works because it has a tremendous effect on our lives. Robert Moses was determined to reshape New York City with bridges, highways, parks, and other public works. To do so, during his forty years in power, Moses displaced a half million of New York’s fourteen million people—forcing them out of their homes, destroying communities. In a democracy, Caro wants us to know how that kind of power (of an unelected official) works.

His powerful interviewing techniques range from the common (use silence to get people to fill in the quiet) to the persistent (asking over and over, “What did you see?”) to the obsessive (moving to the Hill Country of Texas for three years) to knowing the importance of place (taking Johnson’s brother to the Johnson Boyhood Home after visiting hours to trigger hidden memories of difficult dinner conversations between his brother and their father).

The book is disjointed and a bit repetitive because of its nature as a collection. But the dozens of fascinating anecdotes and tidbits give us a window into the work a writer with keen instincts and tenacity.

image: flyleaf of Working by Robert Caro (edited manuscript page by the author)

Retirement isn’t an idea you find in the Bible. Yes, the march of time slows us down, and we need to transition to a new rhythm, allowing the next generation to take the lead. But sipping drinks with little umbrellas by the beach for months on end is not the ambition recommended by Peter, Paul, or Moses.

When formal or full-time employment winds down, we nonetheless still have to figure out what to do with our time. A couple years before I actually stepped down from my job, someone suggested I do an exercise. That was simply to write out a plan. I did it and that helped me clarify in my own mind things I was already thinking about. Here’s what I came up with: 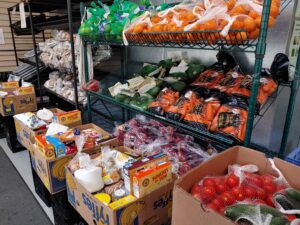 1. Read more. All the books were waiting that I’ve wanted to get to that I hadn’t had time for.
2. Do some freelance editing and consulting. I wanted to do some, but not too much. I already had one project lined up to begin with.
3. Write more. I had one book to finish in the first six months, as well as to keep my blog going.
4. See our thirteen grandkids more. They are in Chicago, Denver, and Tucson. We made several trips out West in the first year and subsequently. What fun!
5. Give more volunteer time to the church. In particular I wanted to start regularly helping out at the food pantry our church sponsors.
6. Give attention to home improvement projects. Almost every room in the house needed attention. I planned to do one or two rooms a year.

Your list would look different. My ideal day, I thought, would be to write, read, or edit in the morning, and then get my body moving by doing home improvement in the afternoon. It has rarely happened exactly that way, but I have enjoyed the mix over weeks and months. All six items on my list have been part of my regular routine. 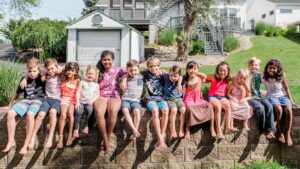 My wife, Phyllis, needed to do it differently. She is such an activist I suggested she not make a plan or any long-term commitments for a year. Otherwise she would fill up her schedule without a clear sense of priorities. And I knew she would have plenty to do during that year, but she needed to organically see what her new rhythm of life would be. So she did. She spent the year continuing to be active with friends, family, discussion groups, and service opportunities. But no big plans.

This took a bit of discipline on her part because immediately on stepping away from her job, she was offered an opportunity to volunteer with a weekly jail ministry. That sounded just right but she waited a year, at the end of which that option was still at the top of her list. She’s done it ever since and loved it.

Adam Grant made a huge mistake.

Grant had the opportunity to invest on the ground floor of a revolutionary e-commerce enterprise. As he talked to the entrepreneurs, he discovered they had no experience in e-commerce, they were hedging their bets by not quitting their day jobs, and their decision-making process seemed interminable. He turned them down. The result? The new company was a massive success.

How could he have been so wrong? That drove him to write his book, Originals. The result? A wealth of research, wisdom, and ideas about how original thinkers work, the counterintuitive strategies they sometimes employ, and unexpected factors that contributed to their success. 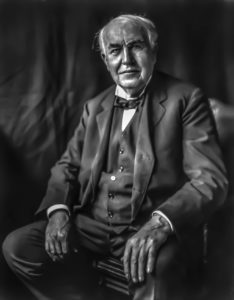 And how do original thinkers work? From Beethoven to Edison to Picasso they outproduced their peers. Each is famous for several works of genius. What is little known is the thousands of works they generated that are forgotten. Producing so much in quantity increased their odds that a few would be landmark creations.

And, second, what counterintuitive strategies do they use? Scientists are twelve times more likely to win a Nobel price if they write poetry, plays, novels or other works, than if they don’t. And twenty-two times more likely if they perform as an amateur actor, dancer or magician. Originals are not mono-focused but wide ranging.

Originals tend not to be risky in all areas of life but only in some. They don’t let impulse or intuition carry them away. They pursue their dream while continually reviewing options, downsides, and problems, as well as strategically procrastinating to make sure they’ve thought things through carefully.

Counterintuitively, successful originals also take on rolls as moderate radicals who are willing to compromise and form unlikely partnerships, rather than extreme radicals who only espouse the purity of their cause (as I previously wrote about here). They also turn anxiety into positive energy while keeping calm in the face of opposition or hostility.

Third, what unlikely factors can contribute to originality? Birth order. Being an only child or being deep in the pack of a large family can make originality more likely. Birth order is no guarantee, however. And regardless of where we fall in a family, we can all increase our creativity and impact by using some of the strategies noted throughout. 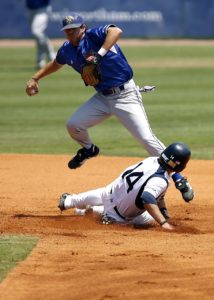 The author’s definition of an original as someone who is different or inventive is not much more than a tautology. He would have been better off to concretely define creativity as combining two things or ideas which hadn’t been joined before or by combining them in a new way.

Those who have read Daniel Kahneman, Susan Cain, and Chip and Dan Heath will also find some ideas familiar. The book is, nonetheless, a pleasure to read with its combination of engaging stories, solid research, and usable, memorable principles.

From what makes a great base stealer to how to parent for moral development to why you should get rid of the suggestion box to how to write great headlines to creating change as a minority, the book is wide ranging and can keep you, like the author, from making some big mistakes.

In the last few years I’ve started a habit. A simple habit. And I have been a bit surprised how helpful it has been. This is the habit.
END_OF_DOCUMENT_TOKEN_TO_BE_REPLACED

Okay, listen up, people. And I don’t just mean you twenty-something-Generation X-Y types either. I’m talking heavy-duty, born in the ’40s and ’50s Boomer Bambinos too.

You’re at a meal with others. Enjoying good food and good conversation. Your cell phone, smart phone, pad, pod or doodad rings, beeps, chimes, vibrates, intones or otherwise comes to life. What do you do?

A. Answer the phone and chat it up while your friends keep eating and talking.

B. Don’t answer the phone and let it ring out.

C. Get up from the table, withdraw to a secure location, and answer the phone.

The correct answer is not ever A. I’m talking (well, actually you are the one talking) mega-rudeness, galactic vulgarity, whacked-out boorish behavior.

Answers B and C are completely acceptable. A? Never!

All right. I’m done now with my very polite rant.

I was at a conference recently where often, when there was a break, the participants tended not to get up, stretch, get a cup of coffee, chat with those nearby or even go to the bathroom. Instead they sat there. They were not mesmerized by the presentation they had just heard. They were mesmerized by their screens—handheld or laptop—checking email, tweets, Facebook, news feeds and more.
END_OF_DOCUMENT_TOKEN_TO_BE_REPLACED

Many writers and editors identify themselves as introverts. Consequently they often become intimidated, in some cases petrified, by the “social” requirements of writing and editing. They think they have limited resources available to them to compete in the often extroverted world of publishing. They absolve themselves from the responsibilities of championing their projects or interacting with readers. They think (or act like) personality is destiny.
END_OF_DOCUMENT_TOKEN_TO_BE_REPLACED

– My work swarms with miscellany—large and small.
– Emails, phone calls, meetings, interruptions, text messages and more are all coming at us faster and faster.
– Multitasking [doesn’t actually work](http://andyunedited.ivpress.com/2010/08/the_shallows_4_the_net_effect.php).
END_OF_DOCUMENT_TOKEN_TO_BE_REPLACED

I’ve been a runner for over twenty-five years. I ran cross-country in high school but gave it up in my twenties. As thirty approached, I realized my body was not serving me well, so I took up the sport again.

Over the years I worked my way up to three miles, then five and then seven. Eventually I ran a couple of Chicago marathons. But now each year I settle for one modest 10K in western Michigan in which I try to beat my age–setting my goal at one minute for every year.

I’d always heard about the runner’s high and the greater energy levels that carry you through the day. I’ve never experienced either.
END_OF_DOCUMENT_TOKEN_TO_BE_REPLACED

In today’s job market, everyone wants that little edge that will set them apart from other applicants. And on the job, everyone wants to make themselves as valuable and indispensable as possible. What can you do?
END_OF_DOCUMENT_TOKEN_TO_BE_REPLACED